Jack Geary Contemporary is pleased to announce the opening of its second exhibition, Federico Cattaneo: Recent Works. On view May 17 through June 9 at Site/109 on Manhattan’s Lower East Side, the show features Cattaneo’s mixed-media paintings that play with the perception of space while confronting the viewer with issues of pictorial representation.

Cattaneo’s intense focus on process and materials generates compositions that imply a deep understanding of space and appreciation of art history. His Lines series evoke the all-over compositions and automatic drawings of Jackson Pollock, as well as the simplicity of Barnett Newman’s zip paintings. In the works, the artist carves meandering paths into wood panels and then fills them in with paint. These lines guide the eye over the intricate wood surfaces, while calling attention to the three-dimensionality of the panel.

Reminiscent of the geometric nature of works by Frank Stella and Brice Marden, paintings from the artist’s Gridded Paint series are built from a series of layers that are themselves an exploration of pictorial representation. On the one hand, the viewer is aware of the flat canvas in front of him/her. Yet, on the other hand, the atmospheric background transforms the flat surfaces and tricks the eye into imagining an infinite expanse. These backgrounds, “trapped” behind a grid, transform the image again into a flat surface. As the artist himself states, “cage-like patterns and frames establish the image in another space and emphasize the ‘flatness’ or the surface.”

Federico Cattaneo was born in Buenos Aires, Argentina, and lives and works in New York City. He received his BFA from the Pratt Institute and his MFA from the School of the Art Institute of Chicago in 2012. His work has been exhibited internationally in both Argentina and the US. 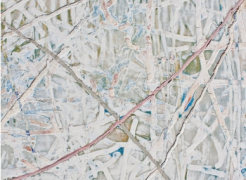