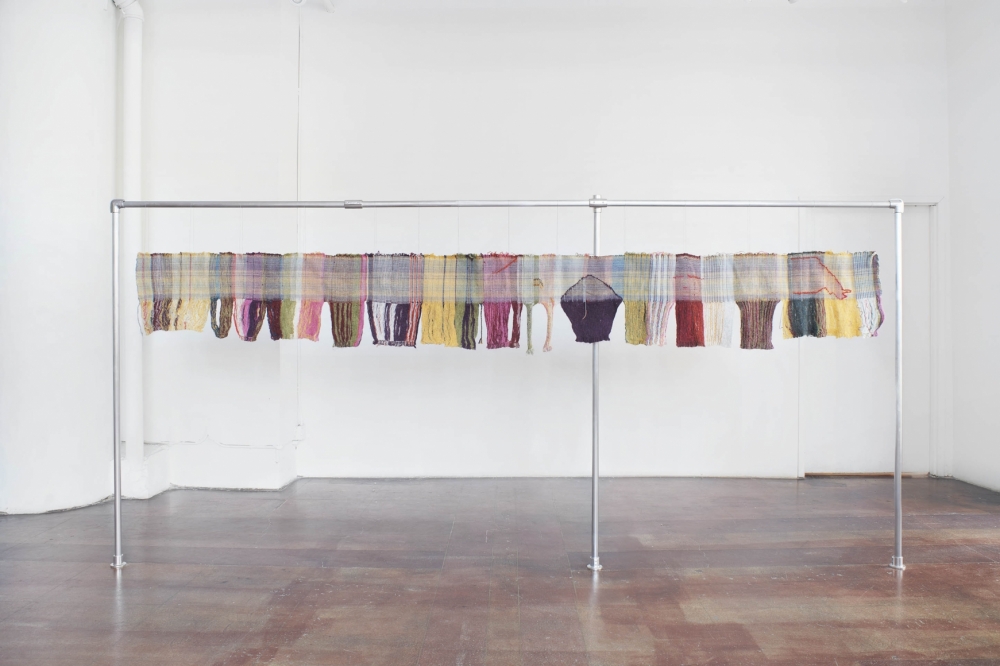 Weaving tends to be a stationary affair. Looms are cumbersome, and the process of threading the weft over and under the warp is tedious. However, the woven sculptures in Kristine Woods’s exuberant show at Geary, “Sparkling or Still,” offered up movement and contingency. Strings dangled, edges frayed, and threads of varying thicknesses were bound together in a tumble of colors that often appeared ready to unravel. Textiles bulged and sagged. Though the works ranged from modest lanate reliefs to a massive installation of felt, they all seemed to have been produced on the move and in haste.

The thirteen-foot-long tapestry Vagrancies Rules, 2018–19, possessed a sense of urgency: Hung at eye level, it was delicately draped over an aluminum rod and counterbalanced by felt-covered rocks. Its presentation alluded to the warp-weighted loom, an early weaving tool that kept the thread taut with stones. But the work also stressed the sculptural quality of the textile: Denied a single vantage point, viewers had to walk around the piece to get a deeper sense of its volume and mass. More striking still was its strange hybridity. While the top half of Vagrancies Rules consisted of latticework, the unwoven threads on the bottom had been felted, so that the matted wool clumped together and wrapped in on itself. The gridded regularity that kept the threads together seemed to have dissolved or, perhaps closer to the stilted double plural of the title, to have wandered off midway through with disconcerting ease.

The artist’s smaller works, too, sensuously combined the technical rigor of weaving with meandering palettes and undulating edges. Of or related to (mutton), 2016, about the shape and size of a slab of meat—as the title suggests—was built from a range of cream and ochre fibers. They were accented by blue and green stripes that emphasized the gory red clot at the piece’s center. Of or related to (sluice), 2016–18, had been rotated ninety degrees from its position on the loom so that the unused chestnut threads of the warp drooped over its flaccid pink-and-purple body like streams of water searching out new paths.

Wordplay marked all the titles in “Sparkling or Still,” highlighting language’s instability and its vagrant rules, mostly arbitrary yet carefully heeded. The title of the largest work in the exhibition, Felt Around Federal Standard 33538, 2019, was both a literal description of the work—Federal Standard 33538 being a government-issued paint color, named according to an opaque system in which the code’s digits indicate gloss, hue, and reflectiveness—and a pun on the past tense of feel. Blocking more than half of the gallery’s windows was a floating wall painted in the familiar, ubiquitous yellow that delineates no-parking areas. Around it, Woods wrapped two huge multicolored felt sheets, so that a complete view of the looped material required a trip outside. The yellow brought the municipal regulations of New York City into Geary, as it echoed the sidewalk markings of Varick Street, the busy southbound extension of Seventh Avenue that the exhibition space faces. But the color went further: In the vicinity of Vagrancies Rules, the yellow wall took on the role of the warp, the standardized field that demarcates the design and holds it in place. Woods’s evocation of architecture as loom underscored the communal nature of the process of making felt (working at such a grand scale, the artist needed nine assistants to transform twenty-plus pounds of soapy, wet wool) while calling to mind the bureaucratic regulations, such as zoning and traffic laws, to which we all submit. Finally, the technique summoned felt’s mythic origins—numerous cultures have stories suggesting that the material was a by-product of a nomadic existence, created when friction and perspiration compressed loose wool into a single sheet. Drifting between soft and hard, between the metaphoric and the actual, Woods’s itinerant approach imbues an ancient material with new possibility.