NEW YORK, NY (October 21, 2013) – Jack Geary is pleased to announce the opening of his exhibition, Ceyda Aykan: The Architect, featuring Aykan’s oil paintings on canvas and works on paper. The exhibition focuses on a series of architecturally centered works and the show will be on view November 2 – December 14 at 185 Varick Street.

In Aykan’s most recent works, she thins and pairs down delicate architectural renderings to their minimal elements.  Her deep blues and browns render a landscape and architecture with a narrative both removed and implied. Her work challenges the viewer’s perspective and plays with questions of scale and hierarchy.

As Sarah Andress notes “these structures lost, in her imaginings and depictions, their stolidity. Her paint thinned, the palette mellowed, and her perspective changed. These buildings come at us at disconcerting angles, or retreat out of reach. They are in motion, sometimes as though seen from multiple angles, often untethered from the ground.”

Andress continues, “Aykan often works in series—revisiting an idea, scene, or place repeatedly, solving it in different ways. This is not only to satisfy the questions she puts to herself; it is to come closer to the subject, formally. Her work holds abstraction and representation in equivalency, weighting each story with the elements, and painterly treatments, that tell—even parallel—the content most completely. She draws attention to the paint and its presence in ways that merge with the underlying subject.”

The works represent Ceyda’s first solo show in New York and includes new work and paintings from her thesis exhibition at the School of the Art Institute of Chicago.

Ceyda Aykan: The Architect will be open from November 2-December 14 at 185 Varick Street. (Corner of Varick & King) 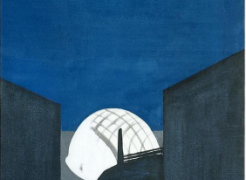