Geary is pleased to present Local Magic, a presentation of work by Alan Prazniak in Gallery 2, concurrent with William Corwin’s solo exhibition. Prazniak's works tend to function at a familiar, small scale for the sake of remaining, in the artist’s words, lovely and local, and to resist larger power structures. With a thick building up of gesso to create a subtle beveled edge of each work before oil is applied to the linen, his paintings begin to take on the role of object.

Prazniak admires the genre of landscape’s ability to provide a vehicle for perspective, metaphor, symbolism, and our humanity. Working with a rotating cast of characters in his painting, he is committed to the fluidity of amorphous and shifting subjects that float in and out of his landscapes. The disembodied flute, trickster orbs, following eyes and moons, all punctuate otherworldly and alien terrains. Clouds, mist, rolling hills and mountains, all suggest an expansive, swirling weather condition that envelopes and comforts rather than exerting an impending disaster. The paintings float somewhere in between mystic and quaint and in this modest presentation of works, Prazniak considers a more humble approach to the world when approaching his subjects.

Alan Prazniak (b. 1985) was raised on a horse farm in rural Pennsylvania, where his formative years were spent navigating the idyllic landscapes of the Delaware Water Gap. He received his BFA from Tyler School of Art and his MFA from Rutgers. He lives and works in Brooklyn but remembers the countryside fondly and visits often. 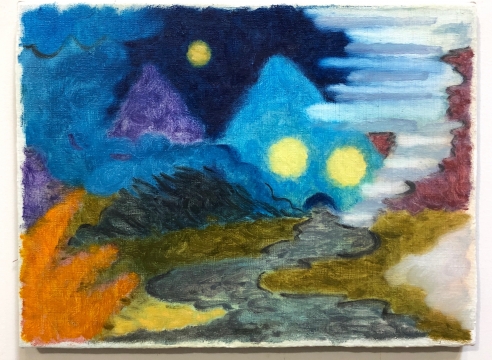