Bedsheet Vessel with Cinders and Cement, 2020

Three Cups in a Dresser Drawer, Bedsheets and Cement, 2020

Geary is pleased to present Cups and Grids, a solo exhibition by Vadis Turner. In Turner’s new work, largely produced within the last six months, a conversation between disparate forces: austerity and vulnerability, weight and flight, structures and unruliness is considered. This body of work evolved from a dual interest in Brutalist Architecture and the biology/behavior of moths. An architectural dialogue, as told by materials like concrete and insulation emerges with a boundless energy in moments throughout the exhibition, but with with questions of fragility and meekness- a leather hide grid drawn in space drapes onto a concrete substrate; a pair of cups composed of concrete and lined with cherry-red bedsheet fragments; charred wood vessels with textiles suspended in decomposition.

Turner considers formal relationships of domestic spaces with a gendered history of hierarchy, challenging and exploding this binary facade: the rigidity of the grids and the potential fullness of the vessel depend on each other. Only when the grids melt into limp linear systems can the cups realize their potential to transgress their vesselness.

Cups and grids emerge and fade, and become each other through the work that Turner presents on the walls and in space.

The exhibition “Cups and Grids” brings the latest work of Vadis Turner, a beacon in the Southern contemporary art firmament, to Geary in downtown New York. The presentation includes large-scale, mixed media wall sculptures made primarily of resin and cement, leather and cloth, and three-dimensional vessels comprised of charred wood, paint, and braided bedsheets. Turner’s pieces harken to the visceral and conceptual qualities of art made in the area in late the 1960s and early ‘70s. This was a time of deep interrogation and subversion of the anti-expressive nature of Minimalist pursuits—particularly the grid—and when materiality, as well as decorative and craft-based media, were being championed primarily by female artists. Harmony Hammond, central to the scene, describes the time:

Artists moved between the disciplines, ignoring, crossing, and dissolving boundaries. … Paint was a material to be manipulated like any other, such as felt, wax, fiberglass, dirt, steel, or old wood. Likewise, nontraditional materials—such as latex rubber, polyurethane, lacquer, tar, blood—could be used as pigment. … Slowly, painting was subjected to the force of gravity, taken out of the rectangle and off the wall, relaxed, collapsed, and reconfigured, frequently occupying a three-dimensional space that could be called “sculpture.”(1)

To present the new work of Vadis Turner, who so deftly employs these tenets, in lower Manhattan five decades later demonstrates the breadth and lasting influence of the tenacious, rule-breaking, “outlaw” artists Hammond describes.(2) Indeed, the works on view in the exhibition might not have been conceived—or at least given merit today—were it not for the consciousness-raising artistic efforts of Hammond, Eva Hesse, Joan Snyder, Howardena Pindell, and others of this earlier era. In her visceral and conceptual use of materials, and her embrace of the decorative, the romantic, and the bodily, Turner is clearly the daughter of this very rebellious revolution.

Turner’s works, however, are not dated throwbacks, but rather timely testaments to the boundary-pushing resonance of this earlier period, one not dissimilar to today in which “revolutions of various kinds were afoot.”(3) The recent global pandemic and its resulting anxiety, isolation, and devastating economic fallout, climate crises, and the widespread cultural unrest and civic demand for justice and racial equality, is inarguably the maelstrom within which these works were created and are now being presented. Certainly a good case could be made for describing Turner’s sculptures purely on their formal merits. They are carefully considered and firmly resolved. They embody rich and sensuous colors, and convey passionate trysts of hard and soft textures and biomorphic and architectonic shapes. After all, even conceptually-driven artist Howardena Pindell—whose Untitled (1968-70) sixteen-unit flaccid grid of tubular canvas segments feels uncannily akin to Turner’s Malleable Grid and Loose Leather Grid and Cement Grid—understood the seduction of aesthetics. She herself described a tendency to make work that is “very beautiful, very physical.”(4) Yet it would be fraught, particularly knowing Turner’s pieces were made in the first half of this tumultuous year, 2020, not to evaluate them within this unprecedented context. Quite simply, the work demands it.

For this body of work, Vadis Turner has been researching Brutalist architecture and the behavior and biology of moths. During her research process, she collected language to inspire its making. Related to moths, her list of phrases include: untethered, camouflaged, and fragile. Related to architecture, her notes include: ridged, compartmental, and controlling.(5) The resulting pieces convey these characteristics as symbiotic dualities, rather than dichotomies. In her work, both strength and vulnerability are present and inextricably linked. The resin-coated mineral wool forms in Eyespots, for example, feel all the more weighted in relation to the two delicately pinned swatches of diaphanous fabric poised for either their flight or their fall. Similarly, works also evoke the feeling of protection and exposure. Mineral wool, a material traditionally used for interior insulation, in Turner’s hands, has been promoted to the foreground of her constructions, laying bare what is typically hidden. These forms, roughly assembled to exaggerate their raw edges in Eyespots, are tenderly buffered by braided bed sheets in Red Findings, an actual and metaphorical softening of the edges.

Turner also poignantly plays on notions of masculine and feminine, describing the series as coming “from the shed and the pantry.”(6) Like feminist artists before her, she interrogates conceptions of women’s work. Many pieces, such as the large vessel The Witch, entwine ribbon-like and braided trimming made of used bed sheets to denote the domestic realm and handicraft traditions. These beautiful adornments, however, are wrapped around formations of scorched and roughly painted branches and logs found in the “brilliant witchy burn piles” her mother, an arborist, amasses on the property of her studio in the Tennessee countryside. “After the fires have subsided,” Turner poignantly writes, “I go and collect the charred remains.”(7) Bed sheets are also a collected item, and though washed and sometimes dyed, remain infused with the energy of their former use. They are what the artist describes as “agitated.”(8) By gathering them from various sources, Turner evokes the communal and the need for comfort and rest. Yet woven among the burned, scarred wood, their incorporation does not suggest the ethereal but the corporeal—needs that are raw, gnawing, constant, and perhaps insatiable.

In these works, like the times in which we find ourselves, there is tension, turbulence. Structures are dissected or seemingly poised to break down. Constructs intended for strength become false premises. Flaccidity, in works such as Loose Leather Grid and Cement Grid, for example, is pronounced by the gridded armature from which the leather net hangs. Vessels, forms which are traditionally made as containers, are wobbly and precariously balanced, as in Encrusted Bedsheet Vessel or Small Unruly Vessel. Surfaces are shellacked for spontaneous preservation. Raw materials intended for support are exposed; those intended to contain are porous. Leather Grid, Fixed and Loose, with its charred wood, and Leather Grid with Cinders, with its resin coating infused with breast milk, become timely flags—once-billowing, now worn, signals of posterity.

Returning to the descriptors culled from Turner’s research, two more esoteric notations petition deeper consideration. The first is that some moths are “tear drinkers of other animals.” It is a compassionate image of interdependency that is both deeply intriguing and emotionally stirring. Secondly, that Brutalist architecture “embodies behavioral expectations” is also particularly poignant.(9) These two seemingly divergent ideas—the need to balance austerity with tenderness—are at the crux of Turner’s compelling investigations. In the works presented in “Cups and Grids,” particularly at this heightened historical moment, we are reminded of tumult provoked from internal and external forces. We are reminded of the challenges of self-reliance, as well as the criticality and consequence of our connectedness. A light scratch beneath the tactile surface of Turner’s work, we find the most complex human bedrock: our vulnerability in the harshest of circumstances. 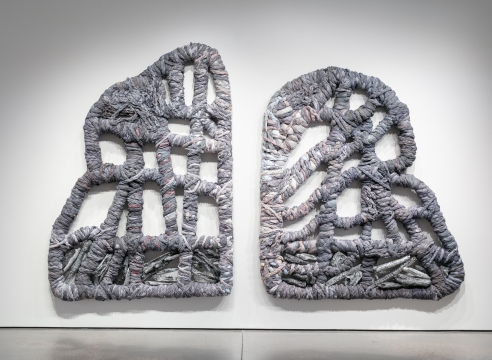