Cloudminders, a solo exhibition by artist David B. Smith, is composed of a series of textile-based works and sculpture that is in essence about the power of collective imagination and world building. Smith begins the process of constructing his work by sourcing imagery from collective digital memory such as screengrabs from video games, YouTube videos, and personal images from social media platforms. Those images are altered in Photoshop, and then jacquard woven via an online service. This fabric is further altered and manipulated by hand with embellishment in embroidery, piecing, and appliqué. In this way, the images become at once strange and unsettling, yet oddly cozy and familiar.

An externalization of personal and collective daydreams, and surreal alternate realities are proposed throughout Smith’s work. A single sculptural form, Mind Shadow, occupies the gallery, in which winding tentacles envelope themselves, resembling a classical Greek sculpture. A modestly sized but haunting portrait is in close proximity. Smith’s interwoven stories evoking human intimacy and alien situations are ongoing: the kaleidoscopic narratives intimate a complex and dystopic stuggle:

A group of ephemeral-bodied Cloudminders occupies the sky and manages the world of digital information, and a physically-embodied group of Cave Dwellers lives below the Earth's surface. The Cave Dwellers are responsible for all manual labor yet have little access to digital technologies, culture and their own histories. The Cloudminders' power relies on the Cave Dwellers' ignorance yet their dominance is in question.

Smith’s approach to textiles blends accessible digital production tools with new interpretations of traditional handmade craft techniques, suggesting a parallel agency of the individual and community to envision and create the future.

David B. Smith holds an MFA from Bard College and has been awarded residencies by Apex Art, New Zealand; Franconia Sculpture Park, MN; Harold Arts, OH; Socrates Sculpture Park, The Waterpod Residency, the Textile Arts Center, and the BOFFO residency, NY. He lives and works in Brooklyn, NY. Smith’s work has appeared in exhibitions at MoMa PS1, The International Center of Photography, Asia Song Society and 56 Henry Gallery, with recent solo shows at Halsey McKay Gallery, The Spring Break Art Show, and LMAK Gallery. His work will also be included in the Rijswijk Textile Biennial at the Risjwijk Museum in the Netherlands in Summer 2019. Smith's work has been discussed in the New York Times, The Observer, Art Fag City, the Washington Post, and Miami New Times. Geary was founded in the Lower East Side in 2013 by Jack Geary and Dolly Bross Geary, and then moved to its current location on Varick Street in West Soho. The gallery represents emerging and mid-career artists working in a variety of media, with an emphasis on those from New York City and the Midwest. Geary presents solo, two-person, and group exhibitions, and seeks to raise artist profiles and exposure through placement in museum collections and exhibitions, and through presentations at art fairs. 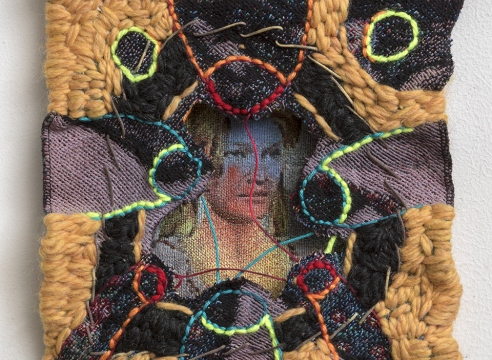